We were lucky enough to experience the partial solar eclipse of 2017 here in Burleson Texas!
Armed with a pinhole projector made by Mariam and Angela, and of course some great Lost Oak Texas Wine we were ready!
The pinhole projector worked!
Tyrell showed up with a welder's hood!!!  And he was kind enough to share!
We all took turns
We later found out that we were not the only ones to watch the eclipse like this.  Apparently we ARE the Texas stereotype!  We saw this meme after we watched the eclipse through a welders hood....
Much to our delight we saw that tree leaves also make pinhole projectors.  The front of the Lost Oak Event center was like a magical disco-ball reflection of crescents.
Solar eclipse, cheers to you! 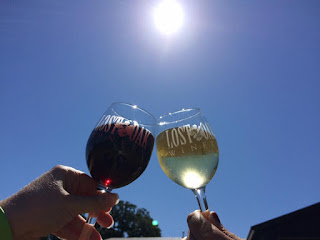