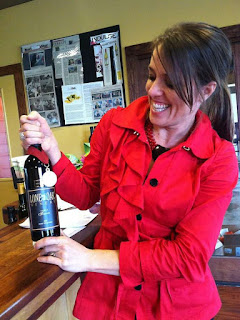 Celebrate Texas Wine Month with Tempranillo!  Use Promo code TEMP10 at the Lost Oak Tasting Room or our online store for 10% off Tempranillo from Oct 4-8, 2017.

Tempranillo, as most of the world knows it today, originated in Spain. Its versatility made it a popular grape with wine makers all over Spain and Portugal.
Here in Texas, grape growers are always looking for varietals that can stand up to our unique climate. After all, it’s not unheard of to have all four seasons in one week, or even one day. Not to mention the heat during the summer can be unbearable for a lot of grape vines. Tempranillo, however, tend to bud out a little later than other varietals making it a little less susceptible to late freezes. They are also heat and drought tolerant and ripen quickly.

Lost Oak Winery is proud to have been featured in the news on multiple occasions with out award-winning Tempranillo.
One of our favorites is this article from 2013 from the Fort Worth Star Telegram, and picked up by the San Francisco Gate News.  Check it out by clicking here!

Roxanne Myers of Lost Oak Winery near Fort Worth, Texas, with Tempranillo that took gold at the 2010 San Francisco International Wine Competition.
For two years, Neal Newsom, a well-regarded West Texas grower, stubbornly put off entreaties from a would-be Dallas winemaker in his 20s to gamble on Tempranillo.
It was the late 1990s and Newsom had never heard of Dan Gatlin, nor did he like what the scion of the Hasty liquor store chain had to say - that the dark red Spanish grape with flavor notes of blackberry and currant might someday produce the state's signature wine.
Gatlin kept nagging, but Newsom remained reluctant, explaining: "Tempranillo just had no history to speak of east of the Rockies. And it hadn't been grown at this altitude in the United States. I was just scared."
Then Gatlin made an unusual offer. He'd buy the vines, have them shipped to the High Plains from California, and supply anything else needed if Newsom contributed the labor to grow it. Gatlin would be reimbursed in grapes - if the vines actually produced.
And they did.
Going for the gold
Texas Tempranillo has now garnered gold medals, including one at the prestigious San Francisco International Wine Competition, and many regional winemakers are predicting it will become the state's best-known wine grape. Bobby Cox, a Fort Worth-reared winemaker and consultant, is convinced that Texas will eventually surpass California in Tempranillo acreage.
"Where was Tempranillo 20 years ago when I needed it?" complained Don Brady, an award-winning winemaker at California's Robert Hall Winery and owner of the Brady Vineyard label, who got his start in Lubbock, Texas. "It may well be a big part of Texas' answer to quality red wine."
Lone Star winemakers have come a long way since the 1970s, when they were advised by "experts" that only American hybrids would thrive in the state. Some did, but the wine was generally disappointing.
Most switched to French and Italian varietals, which garnered respect for many wineries. Early on, Lubbock's Llano Estacado took a double gold (reflecting the judges' unanimous decision) with its Chardonnay at the 1986 San Francisco competition. But Cox said some varieties were more suited to California than Texas, or cost more to grow and yielded less.
'Different here'
"Everything's different here," Cox said. "We're the yang to California's ying,"
"Tempranillo has become a better grape for Texas than Cabernet or Merlot," insists Les Constable, an early experimenter with the Spanish variety who has tried out scores of different grapes at Brushy Creek Winery near Alvord, Texas, 55 miles northwest of Fort Worth. Alamosa Winery's Tio Pancho Ranch vineyard in San Saba County also was a Tempranillo pioneer.
"Like Shiraz is for Australia and Malbec for Argentina, I think Texas is going to do well with Tempranillo," Constable said. "It's already a huge grape for the state."
After Newsom took Gatlin's challenge, he discovered that "Tempranillo turned out to be winter hardy."
Today, he sells much of his Tempranillo to Gatlin's Inwood Estate Vineyards winery in Dallas and San Martino Winery in Rockwall.
"It's just so well adapted to many parts of the state," Newsom said. "It produces high-quality wines even as a young vineyard, 3 or 4 years old, while it takes eight or 10 years to get to that level with other grapes."
And it produces better in his vineyard than Cabernet. In a good year, an acre of Tempranillo yields 4 tons while Cabernet would do half that, he said. In a typical year, both fetch about $2,000 a ton, but with the Spanish grape outproducing by 2-to-1, it proved a boon for Newsom Vineyards.
Akin to cassis
Lost Oak Winery near Fort Worth grows its own Tempranillo but used grapes from Lost Draw Vineyards in the High Plains to be named best Tempranillo at the 2010 San Francisco competition. Lost Oak's owner, retired Alcon Laboratories executive Gene Estes, said the winning wine, aged in American oak barrels, has a dark fruit flavor akin to cassis (black currant) and blackberries - "with some cinnamon and cigar box undertones."
In Spain, a wine buyer can pay $5 for a Tempranillo or as much as $500, depending on the quality, said Gatlin, whose Inwood wines of that variety start at $41.

"In 100 years, Texas will be Tempranillo and everything else will be minor varietals," Newsom predicted.
Tweet

pomodorr.com
@ May 24, 2019 at 11:22 AM
http://https://pomodorr.com/
Hi would you mind sharing which blog platform you're working with? I'm looking to start my own blog soon but I'm having a tough time making a decision between BlogEngine/Wordpress/B2evolution and Drupal. The reason I ask is because your layout seems different then most blogs and I'm looking for something unique. P.S Sorry for getting off-topic but I had to ask!

Lost Oak
@ May 24, 2019 at 1:52 PM
It's integrated into our website software - Wine Direct - a wine selling point of sale that is also our website platform. Cheers!